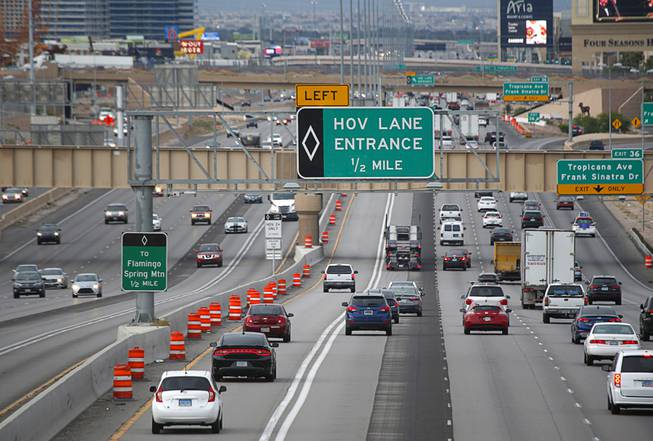 Cars use the High Occupancy Vehicle lane on northbound Interstate 15 near Sunset Road Wednesday, May 22, 2019.

High-occupancy vehicle (HOV) lanes, lanes restricted to cars conveying two or more occupants, date back to 1969, when a bus-only lane was created on Virginia’s Henry G. Shirley Memorial Highway. Four years later, the lane was opened to vehicles with four or more occupants. HOV lanes soon proliferated across the United States, largely in reaction to the Middle East Oil Embargo of 1973.

Legally, they’re open to cars containing two or more passengers (that includes rideshare services like Uber and Lyft; to single-passenger motorcycles; to buses; and to emergency vehicles. Your pets don’t count as passengers, and trucks with more than two axles are excluded no matter how many passengers they contain. But why do we have them, and what purpose do they serve?

Why we need HOV lanes

“HOV lanes carry more people using fewer cars for better air quality, fuel savings and reduced vehicle wear and tear,” says Tony Illia, public information officer for the Nevada Department of Transportation. “They’re also safer and less stressful with fewer cars cutting in and out. Plus, it offers an opportunity to talk, eat, sleep or read while commuting.” And a Vegas fringe benefit: They allow your rideshare driver to avoid traffic snares, which will matter to you once Allegiant Stadium begins hosting home games.

“Clark County last year had 2.2 million residents and 43 million visitors, of which two-thirds drove,” the Department of Transportation’s Tony Illia says. Considering the high cost, disruptive nature and long construction timeline of Project Neon, it’s tough to imagine I-15 being widened again anytime soon. The flood of new residents and visitors is ongoing, and it’s difficult to build a flood channel while the waters are steadily rising. And what’s more, Illia says, Project Neon is working: “I-15 mainline commute times have dipped slightly, despite more vehicle miles traveled.”

What are the alternatives to building more roads?

• Mass transit. More buses, both with regular and dedicated-lane routes … and yes, light rail. Cities like Phoenix, Minneapolis and Seattle haven’t adopted light rail and streetcar lines because they look cool; they use them because they move thousands of people efficiently, and because they drive medium- and high-density residential growth around their stations. (Imagine how much worse convention traffic would be if the Monorail didn’t exist. Even the ridiculed high-speed train line that Virgin wants to build from Las Vegas to Victorville, California, will have a positive effect on Interstate 15 gridlock, even if only on weekends when the Raiders play.)

Las Vegas might not seem light-rail friendly. It’s barely suitable for pedestrians or cyclists. This city was built for single-driver cars, but now there are too many of them—and more visitors are coming, along with many more residents. But we can’t dismiss mass transit just because we’ve come this far without it. Commuters in other cities don’t fight traffic or hunt for parking in paid lots; they take the bus. And many other cities have taken a calculated financial risk on light rail—and been rewarded with faster commutes and greater housing inventory.

• Carpooling. It’s a dirty word to many. But carpooling isn’t a difficult habit to adopt. You’re doing something similar every time you and your friends pile into an Uber or Lyft. Southern Californians are long accustomed to it, and to carpool lanes; as our city draws more expatriates, the idea of carpooling might become more attractive to locals. If you’ve taken the carpool flyover lane from I-15 to U.S. Highway 95, you know its speedy benefits far outweigh the awkwardness of making small talk with coworkers.

Would getting rid of carpool lanes unclog freeways?

Some locals think so. In a recent interview with KTNV 13 Action News, Las Vegas City Councilman Stavros Anthony intimated that Interstate 15’s HOV lanes are nothing more than an exercise in “social engineering. … They are trying to force people to carpool, and that is not going to happen today, and that is not going to happen 10 years from now,” he says. But opening the lanes to unrestricted use, even during off-peak hours, could easily backfire (see “What is induced demand?” above).

Besides, they’re beginning to catch on. “HOV usership has steadily climbed since being introduced in May 2019,” Illia says. Sure enough, a recent Department of Transportation study of northbound U.S. Highway 95 shows that evening rush hour usage of its HOV lanes has markedly increased since 2016. And in response to user demand, the department is adding several entrances and exits to its HOV lanes, most notably between Sahara Avenue and the Spaghetti Bowl on I-15 and adjacent to Craig Road on U.S. 95.

What is induced demand?

It’s an economic theory stating that increasing the supply of something also increases demand for it. Building more and wider roadways only encourages more drivers to use them, filling them up and negating the short-term benefits of wider roads. Illia offers an apt metaphor: “Rather than thinking of traffic as a liquid, which requires a certain volume of space to pass through at a given rate, induced demand demonstrates that traffic is more like a gas, expanding to fill up all the space it is allowed.”

Here’s a local example. You might have avoided the I-15 before it was recently widened—but now, encouraged by the extra lanes and exits, you’ve started using it. Now, multiply yourself by several thousand extra drivers, and you’ll begin to understand why the I-15 still jams up at rush hour.

Induced demand is controversial. Lots of civic leaders dismiss it, because it seems such an obvious thing: If you’ve got too many cars, build more roads, problem forever solved. But this theory has a lot of studies backing it up. In 2009, two economists—the University of Pennsylvania’s Gilles Duranton and the University of Toronto’s Matthew Turner—conducted a study that compared increases in road capacity in different U.S. cities between 1980 and 2000 with the total number of miles driven on those new wider roads over those 20 years. “We found that there’s this perfect one-to-one relationship,” Turner said in a 2014 interview with Wired magazine.

Detractors claim that the effects of induced demand aren’t as severe as those sorts of studies indicate, or that its existence isn’t a reason to quit widening roads. But they might not like the next step that occurs once a city’s streets and highways have been widened to their absolute limit: toll roads.